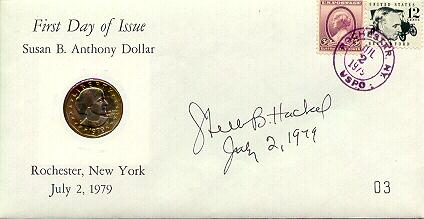 The first Susan B. Anthony Dollars were struck at ceremonies held at the Philadelphia Mint on December 13, 1978. Fearing hoarding by the public, the mint planned to hold release of the dollar until 500 million coins had been stockpiled. July 2, 1979 was selected as the official release date. On this date, ceremonies were held in Rochester, New York, home of Susan B. Anthony. Many celebrities were present at the ceremonies, including the then Director of the Mint Stella B. Hackel. The above first day of issue cover was signed and dated by Ms. Hackel at the release ceremonies. Several private enterprises created first day of issue covers. None was created by the U.S. Mint. Besides Rochester, N. Y., first day covers were postmarked at Philadelphia, Denver, and San Francisco (site of the three mints striking Anthony Dollars), Adams, Massachusetts (birthplace of Susan Anthony), and Washington, D.C.

Below are some of the privately made Susan B. Anthony Dollar First Day of Issue Covers. Others exist.